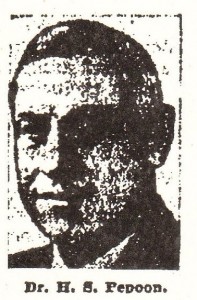 When researching the flora of Northwest Illinois there is one man’s name that repeatedly shows up: H.S. Pepoon. More well known in Chicagoland, Pepoon was a native of Northwest Illinois, was the first professional botanist to study the area’s flora and is responsible for the creation of Apple River Canyon State Park.


His father, George Pepoon, was a Lieutenant in the Civil War, a member of  the famed 96th Infantry from Galena, IL. He was the Superintendent of Schools for Jo Daviess County as well as the Warren Township Assessor. Pepoon School on Twin Bridges Road is named after him. Herman Silas Pepoon was born to George and Mary Pepoon in Warren, Illinois on January 21, 1860.


Herman grew up south of Warren, IL and attended Warren High School (1877).  He left for Champaign to attend the The University of Illinois, graduating with a degree in Natural History (1881). After graduating from Hahnemann Medical College in 1883 he became a doctor and practiced medicine from 1883 until 1892 in Nebraska and Lewistown, IL. In 1892 he left Lewistown and the medical profession to become a botany instructor at Lake View High School in Chicago. He held that position for 38 years until he retired in 1930, when he reached the limit age of 70 years old.


For the rest of the story H.S. Pepoon
Posted by The Greening of Northcenter Neighborhood at 5:54 PM

Email ThisBlogThis!Share to TwitterShare to FacebookShare to Pinterest
Labels: History