Save Energy this Winter: Take these Small Steps

$       Lower Your Thermostat.
$       Set Your Thermostat to 65 Degrees (or lower) at Night instead of 70 Degrees.
$       Switch to a Programmable Thermostat so Heat can be Turned Down Automatically at Night or While you are at Work.
$       Get Your Heating System Tuned Up by a Service Professional Annually.
A service professional will know how to keep your heating system running most efficiently, saving you money on your utility bills.
$        Change Your Furnace Filter Regularly or When Dirty.
$       Keep Doors Leading Outside Closed As Much As Possible.
This will help maintain the warmth in your house by reducing cold air coming inside.
$       Use Window Treatments to Help Keep Your Home Stay Warm.
Curtains and blinds add an extra layer of insulation around your windows.  Closing them at night will help keep the warm air in; opening them during the day will allow the sun to warm your home.
$       Close Your Fireplace Flue when You're Not Using It.
This will help eliminate drafts and keep the warm air inside your home.
$       Install and Use a Ceiling Fan.
Ceiling fans set at a low-speed in a clockwise direction circulate warm air away from the ceiling and move it around the room.
$       Lower the Temperature of Your Hot Water Heater. (110 degrees or lower)
$       Switch to Real Time Pricing for Your Electricity.
See www.thewattspot.com or call 1-877-WattSpot
$       Monitor Your Energy Use.
Join Citizens Utility Board (CUB) Energy Saver to track your energy use and earn reward points for savings.  Points are redeemable at many national retailers.  See www.cubenergysaver.com.
$       Get a Home Energy Audit.
Have a BPI or RESNET certified expert identify your biggest opportunities for improvement before you start investing in expensive items around your home—this can save you thousands of dollars and years of frustration.
$       Seal Air Leaks Around Your Home, Particularly Your Windows, with Caulk or Weather Stripping.
Install weather stripping to alleviate air leaks around windows and doors located between heated and unheated areas.
·      Air leaks around the window and door trim should be caulked, as well as around cove and baseboard molding on exterior walls.
·      Insulated covers should be installed on electrical outlets and switches located on exterior walls.
·      Plastic film insulation can also be applied on windows and sliding patio doors that won't be used in the winter.
·      If window unit air conditioners cannot be removed, they should be covered with plastic and air leaks sealed with foam rope and removable caulk.
$       Air Seal & Insulate Your Attic.
It's one of the most cost-effective savings measures you can take, and you may be able to do it yourself!  Crawl spaces and walls are other key areas for air sealing and insulation.
$       Upgrade to a High Efficiency Gas Furnace or Boiler.
Replacing your old furnace with a more energy efficiency one can save you hundreds annually.
Get a rebate for $600 for boilers, $500 for furnaces and $100 for boiler reset controls through November 30, 2012—see http://www.peoplesgasdelivery.com/home/rebates_residential.aspx.  Federal tax credits may also be available on boilers and furnaces.
$        Insulate Your Exterior Walls.
This will help to maintain a consistent temperature in your home, keeping it warmer in the winter and cooler in the summer.
$       If you are Having Trouble Paying your Utility Bills, Contact The National Energy Assistance Referral Project.

The National Energy Assistance Referral Project is a free service for people who are interested in applying for the Low Income Home Energy Assistance Program (LIHEAP), which may pay a portion of the energy bills of eligible low-income persons.  Call 1-866-674-6327 or email energy@ncat.org.
Posted by The Greening of Northcenter Neighborhood at 2:38 PM 3 comments 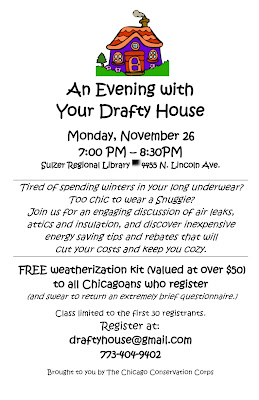 Posted by The Greening of Northcenter Neighborhood at 2:11 PM 0 comments

Email ThisBlogThis!Share to TwitterShare to FacebookShare to Pinterest
Labels: In the News

Posted on MIDWEST ENERGY NEWS 11/06/2012 by Kari Lydersen
Chicago voters have approved a ballot referendum authorizing the city to move forward with municipal aggregation, wherein the city will buy electricity on behalf of close to one million residents.
City officials had promoted aggregation primarily as a way to save money for ratepayers, compared to the rates they would have been paying to get electricity through the utility ComEd. Meanwhile popular support for aggregation was driven largely by the hope that it will facilitate the purchase of more renewable energy and ideally the creation of new renewable generation.
Unofficial returns from the Chicago Board of Elections show the measure passing with 56 percent approval.
Voters in 221 Illinois municipalities also faced ballot referendums dealing with aggregation Tuesday.
Electricity aggregation referenda were also on the way to passing in a number of Chicago suburbs, including the south and west side working class suburbs of Hillside, Chicago Heights, Country Club Hills and Calumet City; and well-off northern suburbs including Glenview and Inverness. The vote was close in other Chicago suburbs, including the south side towns of Blue Island and Dolton.
Since the state legislature passed a law allowing municipal aggregation in 2009, more than 250 communities have taken that route.

Read More For the Next steps!!!!

Posted by The Greening of Northcenter Neighborhood at 2:05 PM 0 comments

Email ThisBlogThis!Share to TwitterShare to FacebookShare to Pinterest
Labels: In the News, NNA News

What Is Electrical Aggregation?


What Is Electrical Aggregation?

Simply put, electrical aggregation allows municipalities to negotiate lower electrical rates on behalf of residents and small businesses. The City of Chicago is asking voters to support a ballot initiative in favor of aggregation on November 6th.  If the measure passes, the City would be able to use the bargaining power of close to 1 million Chicagoans to get electricity supplied to us by one or more alternative suppliers (e.g.; First Energy, Constellation, or Integrys Energy Services). ComEd would still be responsible for the delivery of power and maintenance of the electrical grid, but the portion of your electricity bill that says “Supply” would likely go down and you would continue to receive just 1 monthly bill.

The Northcenter Neighborhood Association supports this ballot initiative for the following reasons:

1)   SAVINGS – According to the Chicago Tribune, more than 200 Illinois villages and cities approved aggregation since last March and have seen yearly savings for residential customers ranging from $200-$300.
2)   FLEXIBILITY – Homeowners who want to opt out of the program should be able to do so. This would likely be true whether you get your electricity supply through ComEd or if you already have a contract with an alternative electricity supplier.
3)   GUARANTEE – Many municipalities have negotiated clauses into their contracts with alternative suppliers that if their rates go higher than ComEd, residents and businesses will only have to pay the matching rate or lower.
4)   GOING GREEN - Municipalities have already taken advantage of aggregation and some villages like Oak Park are even getting 100% or their energy from renewable sources.

We support the possibility of getting 100% of North Center’s electricity from renewable sources and reducing the neighborhood’s greenhouse-gas footprint. We encourage you to support the ballot initiative on November 6th.

Here are some additional informative links about the Chicago electricity referendum:

City of Chicago Website for Electricity Aggregation
Sun-Times article from Tuesday, 10/23/12
Posted by The Greening of Northcenter Neighborhood at 1:56 PM 0 comments